Association for Diabetes and Obesity REversal

A humble beginning of the “India free of obesity and diabetes” campaign was made in 2013. At that time it was all about lectures of Dr.Dixit in various cities for small groups. People connected through sms and email. In 2015 for the first time the idea of using social media emerged. One facebook group, one facebook page and whatsapp groups were created. By end of 2015 there were around 10000 members connected with the campaign. Slowly the network began to grow and today there are more than 35000 people from over 36 countries directly connected with this campaign. Posting of lectures by Dr.Dixit on YouTube brought a great change in the campaign and made it viral. Lakhs of people viewed these lectures in English, Marathi and Hindi and started following the simple and effective lifestyle suggested by him.

The campaign was renamed as “World free of obesity and diabetes campaign” on the death anniversary of our mentor late Dr.ShrikantJichkar on 2nd June 2018. Today the campaign is progressing fast with the help of more than sixty active coordinators who are selflessly contributing to this cause. These include doctors from various pathies and specialties and also many are non doctors.

This Method is Useful For All Because...

The lifestyle modification suggested in the campaign is in line with the scientific facts about insulin secretion, function and effects.  The only effective and sustainable way to reduce insulin level is to reduce eating frequency.

As of now thousands have lost weight by following this lifestyle modification. Hundreds of prediabetics have converted to nondiabetic state. In diabetics the doses of medicines have decreased or completely stopped. 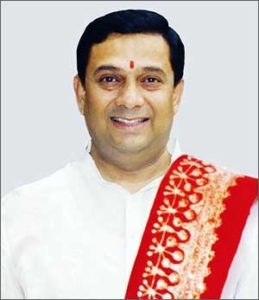 Late Dr. Shrikant Jichkar, the mentor of this campaign was a gifted genius. He was a doctor, social reformer, administrator and a politician. He had the honour of being in Limca book of world records for acquiring the maximum number of post graduate degrees from various universities of India. He passed Indian civil services examination to become IPS and then IAS. He became member of legislative assembly of Maharashtra at a very young age and as an exception, was sworn in as a minister before he got elected! An efficient task master, eloquent orator with extraordinary intelligence, he dominated all areas of social life. Whatever be the field; religion, economics, politics, medicine or philosophy his presence was felt. He guided the people of this state and country towards healthy lifestyle to prevent diseases and live for hundred years.

He first propagated the idea of “Carbo-insulin connection” in India. His work was responsible for initiation of this campaign. We all pay tributes to this legend

Dr. Jagannath Dixit, a dedicated and devoted medical teacher, with more than 28 years of experience of teaching in medical colleges initiated this campaign after getting fantastic results by following this lifestyle modification. He excels in sports, social activism and medicine. An extraordinary orator, with commitment to the poor and needy people from the society, he has contributed immensely to change lives of thousands of people. He has ably carried forward the work initiated by late Dr.Jichkar.

I would like to congratulate Dr.Dixit for writing the book titled: ‘Effortless weight loss and diabetes prevention’. The role of insulin resistance is well known in pathogenesis of lifestyle disorders in India and needs to be tackled in the simple, practical, non-expensive way as elucidated in the book. At the end caloric restriction in order to not store it on our body in the form of fat is a Mantra to healthy living.”

True efforts as per his protocol have created miracles in lives of many people. Myself being a busy gynaecologist, meet increasing number of Polycystic ovary cases in young adolescents as well as adult women. Obesity is a co-morbid factor which adds fuel to the fire of PCOS. Since I heard his talk and read his book on this subject, I have started using it diet protocol for my patients of infertility, especially for the category of ‘Obese PCOS’ since August 2016. I have named this as ‘JV Protocol’ in honour of Dr.J.V.Dixit Sir. My records and observations in general have shown almost 8-12 Kg weight loss in those cases that have sincerely followed this diet protocol. Additionally, I have observed and documented that some of these cases are regularly ovulating without Ovulation Induction drugs. Menstrual cycles have got regulated in cases that had 4-5 monthly menstrual cycles. 2 out of my small series of 30-40 PCOD patients have conceived just with this protocol without any medicines.

I am sure, the rational way of JV Protocol has helped not only obesity to conquer upon but it has helped to bring back physiological hormonal milieu in women suffering from PCOS. I wish this campaign a grand success!

I am serving the people of Nandurbar since 1982. I heard Dr.Dixit sir’s lecture on YouTube. Then I could help in organizing his lecture at Nandurbar on 22nd July 2018. I was highly impressed by his theory and started following it for myself. I got very good results. Then I started advising this diet plan to some of my patients. I am happy to say that these patients lost weight and their doses of anti-diabetes medicines and insulin got decreased. This diet plan has helped many people in Nandurbar to lose weight more than 10Kg in few months. The Mantra given by Dr.Dixit to the society is very effective. Everybody should follow it sincerely to remain healthy and free from diseases. I wish best luck for this campaign!

On 22nd July 2017 my weight was 76 Kg and abdominal girth was 38.5 inches. I was diagnosed to be prediabetic with HbA1C of 5.96% and fasting insulin of 11.6. I was fortunate to listen to Dr.Dixit sir’s lecture at Chalisgaon. I followed the diet plan and exercise protocol sincerely. On 11th January 2018 my weight reduced to 65.5 Kg! Abdominal girth reduced by 3.5 inches to reach 35 inches. More importantly HbA1C reached to nondiabetic level of 5.6! Now on, I have decided to follow this diet plan for rest of my life. I have started prescribing this diet plan to my patients too. This diet plan is not only useful against diabetes but also in thyroid and menstrual disorders. Actually living not only becomes healthy, but cheerful, youthful and enriched. Encouragement given by Dr.Dixit Sir on groups as well as individually to those who are following this plan seriously is also very important. I feel proud that I got opportunity to join this campaign. I thank him from bottom of my heart.

Diabetic to Pre-Diabetic in three months

Diabetic to Pre-Diabetic in three months My name is Mrs Jayshri Bhapkar aged 53 years and I am based in Pune. My mobile No. is

Diabetic to pre diabetic in 3 months Hello ! I am Rupali Rohit Pardeshi. Social Worker. Four years ago I learnt that I have Type II diabetes.

Join Now! It's FREE and will be forever